Book launch: English Landscapes and Identities. Investigating Landscape Change from 1500 BC to AD 1086 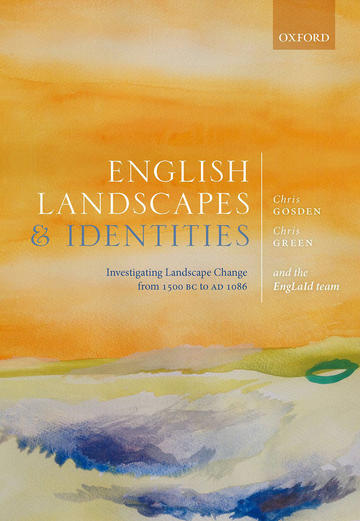 We are delighted to announce the launch of the book ‘English Landscapes and Identities. Investigating Landscape Change from 1500 BC to AD 1086’. This book is the culmination of a project, funded by the European Research Council (ERC), which began in October 2011 and ran until the end of 2016.

Professor Chris Gosden was the Principal Investigator and the project developed through the thoughts and efforts of a team of 10 researchers and DPhil students at the School. The English Landscape and Identities project analysed change and continuity in the English landscape from the middle Bronze Age (c. 1500 BC) to the Domesday survey (c. 1086 AD), synthesising all the major available sources of information on English archaeology to examine this crucial period of landscape history.

The book looks at the nature of archaeological work undertaken across England to assess its strengths and weaknesses when writing long-term histories. Among many topics it examines the interaction of ecology and human action in shaping the landscape; issues of movement across the landscape in various periods; changing forms of food over time; an understanding of spatial scale; and questions of enclosing and naming the landscape, culminating in a discussion of the links between landscape and identity. The result is the first comprehensive account of the English landscape over a crucial 2500-year period. It also offers a celebration of many centuries of archaeological work, especially the intensive large-scale investigations that have taken place since the 1990s and transformed our understanding of England's past.

Working in close partnership with Historic England (HE), the British Museum, the Portable Antiquities Scheme (PAS), Historic Environment Records (HERs) and the Archaeological Data Service (ADS), the project combined a mass of existing artefactual and mapping data from – amongst others – HE’s National Mapping Programme (NMP), the PAS, the ADS and HERs.  This was the first time since the onset of developer funded archaeology in 1990 that landscape and archaeological features, together with finds, were analysed on such a comprehensive scale over such an extended time period. It provided an excellent opportunity to understand the development of the English landscape and the identities of the people who inhabited it over a long-term perspective.

Long before the Norman Conquest of 1066, England saw periods of profound change that transformed the landscape and the identities of those who occupied it. The Bronze and Iron Ages saw the introduction of now-familiar animals and plants, such as sheep, horses, wheat, and oats, as well as new forms of production and exchange and the first laying out of substantial fields and trackways, which continued into the earliest Romano-British landscapes. The Anglo-Saxon period saw the creation of new villages based around church and manor, with ridge and furrow cultivation strips still preserved today.

Looking back at the project, one of the team, Daniel Stansbie, has said that "the EngLaId project was a unique opportunity to "zoom out" from my everyday work in the developer-funded sector and appreciate the results of that work at a large scale. I was surprised by the number of new skills and the complexity of the new knowledge that I picked up - I thought that it would be a case of "scaling up" what I already did and knew - but far from it. The diversity of the approach of EngLaId, methodologically, analytically, theoretically and the long timescale is obviously what made it so innovative and also so challenging and fun to be part of. There were obviously lots of important results and that comes from the diversity of the project - results that stand out at the moment for me include the work on barrow relationships and field-boundary alignments and the visualisations and the art work in general which is fantastic." 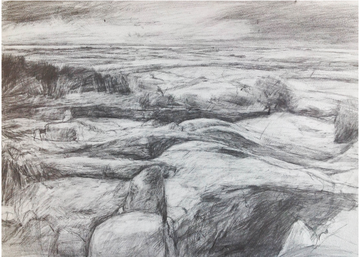 The project artist Miranda Creswell recorded the team’s innovative ideas and working methods through drawings and images that focused, on one level, on the themes of connecting ideas (for example through note taking in project meetings and conversations) and, on another level, on more specific landscape projects both on her own and with a range of groups.

Of working on the project Miranda says 'Working with over nine archaeologists was extraordinary, my role evolved over the five years.

I archived team notes, photographed meetings, went to areas in England that the team was focussed on and made lengthy drawings to bring back to the meetings, even adopted a dog as part of drawing in Didcot! Writing blogs on archaeology and art involved communities crucially out of Oxford. The five years flew by and there was a sadness when the research came to an end'.

The book can be purchased now at the OUP online store and all good bookstores.