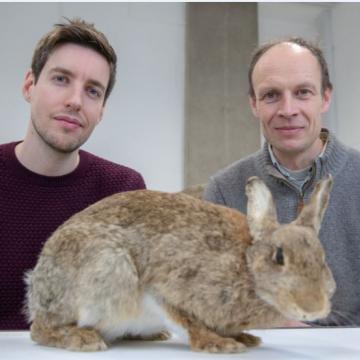 Nearly seventy years after myxomatosis decimated the rabbit populations of Australia, Britain and France, a new study published today in Science and based on the PhD research by Dr Joel Alves, reveals how the species has evolved genetic resistance to the disease through natural selection.  At a time when rabbit populations are collapsing across the UK and mainland Europe, this research may provide clues to the animal’s future.

The team collected historical samples from 11 natural history museums in the UK, France, Australia and the United States. One of the rabbits from which DNA was sequenced belonged to Charles Darwin and is now housed in London’s Natural History Museum. Joel Alves said: “It wasn’t easy to get samples from so many long-dead rabbits. Not all natural history museums keep rabbits because they are not very exotic compared to other species. But the museums we worked with have done a great job of keeping their specimens well preserved for decades. This and the availability of new technology gave us a unique opportunity.”

“We compared rabbits collected before the virus outbreak in the 1950s with modern populations that evolved resistance, and found that the same genes had changed in all three countries. Many of these genes play a key role in the rabbit immune system. Often evolution works through big changes in single genes, but our findings show that resistance to myxomatosis likely evolved through lots of small effects spread across the genome.”

Joel has joined the School's Palaeobarn team and continues his research, investigating rabbit domestication and the biological and cultural origins of Easter traditions, with the Easter E.g. project.