With a force equivalent to the biggest volcanic eruption in recorded history, in 431 CE the Maya civilisation of El Salvador was laid waste as the Ilopango volcano exploded, killing every living thing within 40 km and turning day into night for a week, a report from Oxford archaeologists has found.

Read the article here: The magnitude and impact of the 431 CE Tierra Blanca Joven eruption of IIopango, El Salvador

It was known that there had been a major volcanic eruption in the region, but through pain-staking hi-tech archaeology, the Oxford led research, carried out in collaboration with various researchers from international institutions, established the date and nature of the enormous eruption. Thanks to ice core dating techniques, the team is able precisely to date the massive eruption to within just a couple of years, revealing that global temperatures fell around 0.5 degrees Celsius following the blast, and a vast plume was sent 45 km into the air.

Dr Victoria Smith, Associate Professor and head of Oxford’s Tephrochronology group, which dates volcanic eruptions, said this Ilopango eruption was more than 50 times bigger than that of Mount St Helens which led, in 1980, to the biggest known volcanic landslide in recorded history and saw ash scattered across the entire north west of the US.

And she said, the pyroclastic flows from the eruption of Ilopango were 10 times the volume of those from Vesuvius, which famously erupted in 79 CE, preserving the Roman city of Pompeii in ash. 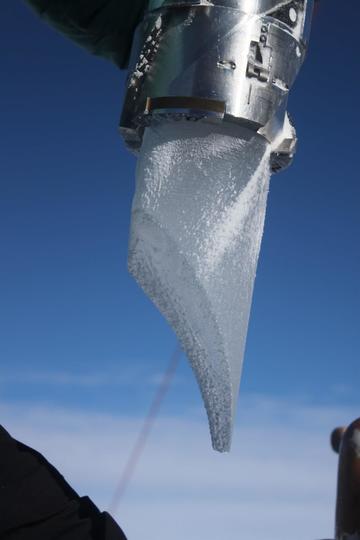 Research by the team shows Ilopango’s ash was sent more than 7,000 km, as far away as Greenland – although, Dr Smith says, the southern hemisphere would have borne the brunt of climatic effects of the eruption. She explains, ‘We studied ice cores in Greenland which contained glass shards and sulphur deposits from the eruption.

Dr Smith and the research team used a 3-D tephra dispersal model to estimate the eruption plume rose to 45 km, and that around 55 km3 of magma erupted from Ilopango – which compares with just 1 km3 thrown up by Mount St Helens.

‘More than 2 million km² of central America was covered with at least ½ cm of ash and it would have been dark over this region for at least a week,’ she says.

The explosion took place during the Maya Early Classic Period, which extended from 300 to 600 CE, as the civilisation saw growth across central America. But, according to Dr Smith, ‘The explosion would have killed every living thing within 40 km and there would have been no inhabitants for many years or decades in the vicinity.’

The enormous eruption did not, however, have a marked impact on the Maya elsewhere, with the civilisation persisting despite various collapses until the Spanish arrived in the New World.

Ilopango was thought to have been responsible for the anomalously cold decade in the Northern Hemisphere around 540 CE. But, the Oxford team’s work shows this date is at odds with archaeological evidence, which actually suggests a date near the start of the Early Classic period.

According to the study, ‘Our precise dating of 431 ± 2 CE allows us to pinpoint the eruption in climate proxy records and shows that its impact was apparently limited. It appears to have only had major effects on populations within 80 km of the volcano, where the regions were blanketed by decimetres of ash fallout and pyroclastic density currents.’

Others in the research team:

Tephrochronology is a field that involves using volcanic ash (tephra) layers to date sequences such as archaeological records and long marine or lake cores (records of past climate). Large volcanic eruptions inject large volumes of quenched molten rock into the atmosphere, and disperse particals of volcanic glass and minerals hundreds to thousands of kilometres from the volcano. These deposits form marker layers in ice cores and sedimentary sequences, which can be used to correlate and synchronise records. Furthermore, the eruptions can be dated using radiocarbon (0 to 50,000 years) and Ar/Ar (anything outside radiocarbon timeframe) methods and these dates can constrain the chronology of the sequences in which the tephra are found.

In order to use tephra for chronology and date palaeoenvironmental and archaeological records we need: well developed eruption stratigraphies, knowledge of the size of the eruptions, and some chronological constraints. A lot of this information does not exist or is particularly patchy for some regions and thus, we have been building up tephrostratigraphies for various regions and establishing the dispersal of some of the largest eruptions that happened in the past. These detailed tephrostratigraphies and knowledge of past eruptions is particularly important to ensure correlations between records are accurate, which is crucial to studies that use the chronology such as archaeology and investigations into past environmental and climate changes. Information on the magnitude and frequency of large volcanic eruptions is also critical for hazard and risk assessments for cities and regions in which the volcanoes are located.

This recent paper highlights an aspect of the research we do within the Tephrochronology Research Group in the School of Archaeology. It demonstrates that the research that we do is interdisciplinary, and this paper alone involves volcanologists, archaeologists, radiocarbon specialists, dendrochronologists and climate scientists. Our group is currently working on the eruptions of volcanoes in the Bay of Naples (Vesuvius and Campi Flegrei), extracting a long-term history of Japanese volcanism using the Lake Suigetsu sediment record (Sophie Vineberg, NERC DTP DPhil student), the eruptive history of the volcanoes surrounding Mexico City (Dr Ivan Sunye Puchol, postdoctoral researcher on the NERC funded MexiDrill project), and planning work on the Canary Islands as the tephra layers are found in archaeological sites in North Africa (Dr Danielle McLean, Leverhulme Early Career Fellow starting in May 2021).