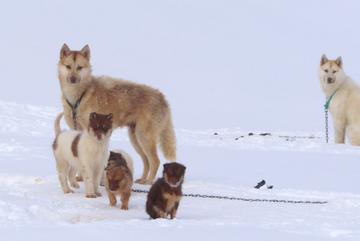 New collaborative research publised today in the Proceedings of the Royal Society shows that the Inuit introduced a new dog population to the Arctic region suggesting that they were keen to enhance or keep the special features of their dogs which they brought with them when they migrated from Alaska and Siberia into this hostile environment. This study, led by Dr Carly Ameen (University of Exeter) in collaboration with scientists including Professor Greger Larson (Palaeobarn, School of Archaeology) and Dr Laurent Frantz (now Queen Mary University), analysed the morphology of skulls and teeth and mitochondrial DNA of hundreds of Arctic dogs that lived over a span of 5,000 years.The results showed that Inuit dog skulls dated from 2,000 to 200 years ago resembled those of recent Arctic dogs, but differed from those of dogs that populated the region before the Inuit arrived.

Dr Carly Ameen said: “Dogs have lived in North America for as long as humans, but we show here that the Inuit brought new dogs to the region which were genetically distinct and physically different from earlier dogs." The genetic analysis suggests the newly introduced dog population spread quickly across the Artic. Archaeological evidence suggests that before the arrival of the Inuit in North America, dog sledging was a rarity and the authors suggest that dog sledges would have given the Inuit a distinct advantage over other groups by enabling them to migrate across huge distances in much less time and effort. The genetic legacy of these Inuit dogs can still be seen today in Arctic sledge dogs.