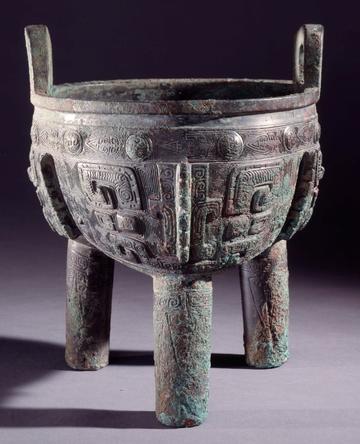 New research published today suggestes that social status determined not just the amount but the quality and production methods of the material people had access to in the cemetery Anyang, the last royal capital of Bronze Age Shang China (ca. 1600 BC – 1045 BC).

The FLAME team in the School of Archaeology University of Oxford, who are investigating the Flow of Ancient Metallurgy across Eurasia, have reassessed the analysis of this metal from low and high elite burials at Anyang.

The Bronze Age ruins at the modern city Anyang, or Yin ruins (in Chinese Yinxu, 殷墟) are among the oldest and largest archaeological sites in China, and have UNESCO World Heritage Status. As well as the discovery of oracle bones (ox scapulars with the recording of divination – so far the earliest known Chinese writing), this site is famed for the incredible amount of bronze ritual vessels, weapons and tools in the burials. While many of the tombs have been robbed, one tomb alone, that of Lady Fuhao, the consort of the King Wuding and a prominent military leader, contained over 1.6 metric tons of bronze, primarily as ritual vessels.

Led by Ruiliang Liu (Ray), and recently published in Scientific Reports, the team sought to understand how the people of Anyang could maintain their metal supply, when large amounts of material was removed from circulation by burial. Along with the FLAME team (Ruiliang Liu, A. Mark Pollard, Victoria Sainsbury, Philly Howarth, Samantha Bowring), collaboration was done with other colleges in Archaeology, Statistics and Mathematics (Jessica Rawson, Limin Huan, Bohao Yao, Yuting Fu) and external partners (Qin Cao of National Museums Scotland, Cheng Liu of Northwest University, Peter Bray of Reading University, and Jigen Tang of Southern University of Science and Technology).

By considering the chemical analysis of bronze objects within their archaeological contexts, this paper shows that the casting and circulation of metal at Anyang was very strongly governed by social hierarchy. Objects belonging to the high elites such as Lady Fuhao, the King buried at the tomb M1004, important military leaders such as those buried at tomb M160 and M1046, were made by carefully controlled alloying practice using very pure copper, whereas the lower elites only had access to bronzes made by secondary alloying practice and copper with more impurities, some of which were more likely by mixing and recycling of broken or older objects.

The team propose that recycling has been widely concerned not just in the modern society. In the deep human past such as Bronze Age, recycling was already treated with not only economic but also the more fundamental social, ritual, political or even magic consideration. Disentangling the choice of recycling made by the Anyang people throw new light on the how Chinese societies from ancient to now achieve mass production.  This has also very important implications for the use of chemical and isotopic studies to determine the potential provenance of the material from Anyang, and our understanding of the social and technological organisation of Bronze Age China.