Major and Champ became the latest dogs, in a long history, to follow their people on an American Journey. 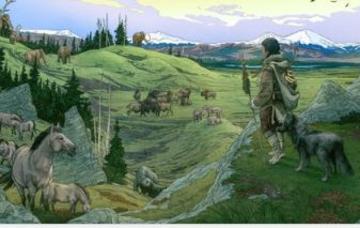 Research published this week in the Proceedings of the National Academy of Sciences (PNAS) reveals that the relationship between not just the first Americans’ but everyone’s best friend was deeper than previously thought – 23,000 years’ deep, in fact.

According to the new research, from an international team of archaeologists and geneticists including Professor Greger Larson, dogs travelled alongside the first people who made the journey across the Bering straits to the Americas. Read the paper here.

Advances in the isolation and sequencing of ancient DNA have begun to reveal the population histories of both people and dogs. Over the last 10,000 y, the genetic signatures of ancient dog remains have been linked with known human dispersals in regions such as the Arctic and the remote Pacific. It is suspected, however, that this relationship has a much deeper antiquity, and that the tandem movement of people and dogs may have begun soon after the domestication of the dog from a gray wolf ancestor in the late Pleistocene. Here, by comparing population genetic results of humans and dogs from Siberia, Beringia, and North America, we show that there is a close correlation in the movement and divergences of their respective lineages. This evidence places constraints on when and where dog domestication took place. Most significantly, it suggests that dogs were domesticated in Siberia by ∼23,000 y ago, possibly while both people and wolves were isolated during the harsh climate of the Last Glacial Maximum. Dogs then accompanied the first people into the Americas and traveled with them as humans rapidly dispersed into the continent beginning ∼15,000 y ago.