Your chance to vote for Denny, the human hybrid, in Science’s Breakthrough of 2018

Your chance to vote for Denny, the human hybrid, in Science’s Breakthrough of 2018 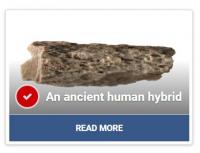 It’s that time of the year again: Science’s reporters and editors are homing in on the Breakthrough of the Year, their choice of the most significant scientific discovery, development, or trend in 2018. That selection, along with nine runners-up, will be announced when the last issue of the year goes online on 20 December.

'Denny' has been selected as one of the contenders for this accolade and we are very proud to have been part of the team who discovered her.

DNA from a bone fragment of a woman who lived more than 50,000 years ago indicates her mother was a Neanderthal and her father a Denisovan, a distinct group of archaic humans. The finding is the most direct evidence yet that these ancient human groups interbred.

You can get in on the action! Pick your favorite breakthrough from the candidates below by Wednesday, 5 December. Then check back on Thursday, 6 December, when we will start a second round of voting with your four top picks. We will announce the winner—the People’s Choice—along with Science’s choice on 20 December.