Resolving the dating issues of the Anzick Clovis site 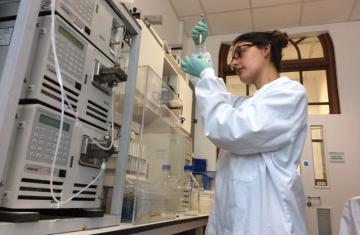 This past year, the second in her DPhil in Archaeological Science (ORAU, RLAHA), Lorena Becerra-Valdivia co-authored a paper ‘Reassessing the chronology of the archaeological site of Anzick’ published in the Proceedings of the National Academy of Sciences of the United States of America. This work is part of Lorena’s DPhil thesis, which focuses on tracking early human dispersals in the Americas using radiocarbon dating and Bayesian age modelling methods.

Found in 1968, the archaeological site of Anzick, Montana, contains the only known Clovis burial. Here, the partial remains of a male infant, Anzick-1, were found in association with a Clovis assemblage of over 100 lithic and osseous artefacts—all red-stained with ochre. The incomplete, unstained cranium of an unassociated, geologically younger individual, Anzick-2, was also recovered. Previous chronometric work has shown an age difference between Anzick-1 and the Clovis assemblage (represented by dates from two antler rod samples). This discrepancy has led to much speculation, with some discounting Anzick-1 as Clovis.

To resolve this issue, Lorena and the team of researchers conducted a comprehensive radiocarbon dating program that utilized different pretreatment methods on osseous material from the site. Through this comparative approach they obtained a robust chronometric dataset that suggests that Anzick-1 is temporally coeval with the dated antler rods. This implies that the individual is indeed temporally associated with the Clovis assemblage. So why is this significant and what impact will these findings have?

The archaeological site of Anzick, Montana (named after the family who own the land) is of great importance within First Americans research, as it contains the only human remains (Anzick-1) yet found that belong to Clovis—the earliest, widespread prehistoric complex of North America. Given that a divergence between Native American populations—between Native Central/South Americans and North Americans—was found to predate Anzick-1, the findings of this paper suggest that the peopling of the Americas was a more complex, perhaps ancient, process than previously thought. Furthermore, because the Anzick genome is critical to understanding early settlements and the origin of modern Native peoples, the results of this study will be critical to helping geneticists estimate the timing of the peopling of America.