The Environmental Archaeology of Pompeii and Herculaneum

The Environmental Archaeology of Pompeii and Herculaneum

A major research programme has been developed by co-operating with the field projects in the Vesuvian area of the British School at Rome, das Deutsche Archäologische Institut Berlin, the Herculaneum Conservation Project, the Svenska institutet i Rom, the University of Reading and the University of Stockholm with the kind assistance of the Soprintendenza Archeologica di Pompei. The Oxford team has undertaken sample analysis and selected excavation within the various projects to investigate aspects of the environmental archaeology of the sites. The studies fall under four major headings. 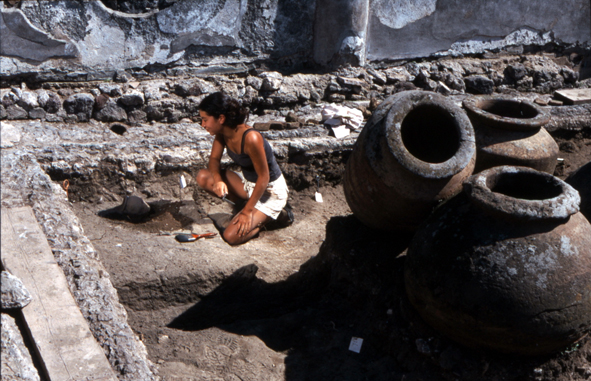 1. Environmental Archaeology of Peristyle Gardens (Fig 1 which shows an Oxford undergraduate excavating a flowerpot in the peristyle garden of House VI 16,27, Pompeii.). The surface of some gardens of Pompeii as buried by the eruptions of Vesuvius in AD79 had been studied in detail by Jashemski but little excavation had been undertaken of the garden soils themselves. Two gardens, at VI 16,27 and V 1,18 (House of the Greek Epigrams), were fully excavated. Flower pots, some purpose-made plant containers others pierced cooking pots, showed the positions of some trees and shrubs. One of the most important discoveries was evidence for the bedding-out of herbaceous plants in the form of a rectangular grid pattern of planting holes filled with soil which had been on the roots of the plants. Molluscan analysis of this soil showed it to be alluvial, so the plants had perhaps been raised in a nursery garden on the Sarno floodplain south of Pompeii. 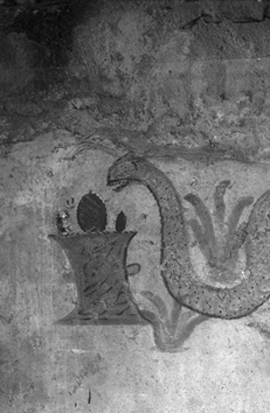 2. Burnt Offerings to the Lares (Fig 2 from left to right a fig, a possible egg, a pine-cone and a date). Small pits containing high concentrations of cremated bones and carbonised plant remains were found in the gardens of VI 16,27 and V 1,18 and also the two peristyle gardens of I 9,11-12 (House of Amarantus). The bones include parts of piglets and the heads and feet of cocks. The carbonised remains include stone-pine cones, figs, dates, grapes and hazel nuts. Other items include a piece of poppy-seed bread or pastry. These remains have been interpreted as offerings to the Lares (household gods). Several classical authors refer to such offerings and they are depicted on wall paintings at lararia in Pompeii but these are the first occasions such remains have been found in the ground.

3. Dietary Remains from Latrine Pits and Sewers (Fig 3 which shows food remains from a latrine pit: grape pips, fish bones and sea urchin shell). Latrines were usually in kitchens and were used for the disposal of both human excrement and kitchen waste. The pits and sewers beneath then contain a great wealth of dietary evidence including calcium-phosphate mineralised seeds, small bones and marine shell fragments. Only small-scale investigations have been made at Pompeii but a large programme of analysis has begun on the contents of a sewer beneath Insula Orientalis II at Herculaneum as part of the Herculaneum Conservation Project. 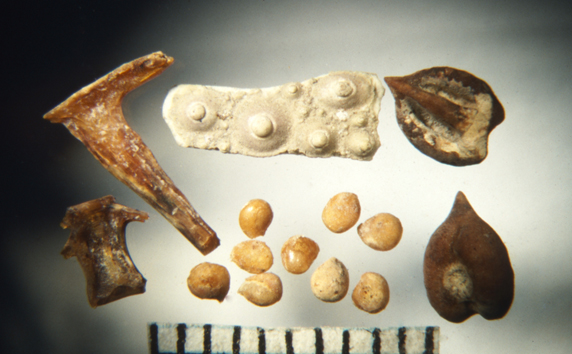 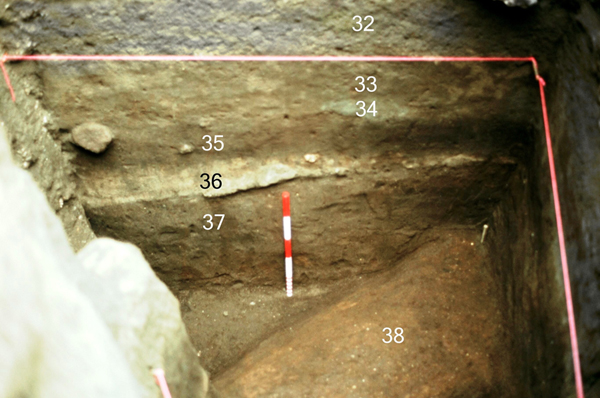