We asked Dr Sheila Raven, the School's Post-Excavation Manager, to introduce her team of dedicated and highly skilled volunteers who join us every Wednesday in the Institute's Lower Basement. Here she shares some of the ways they sort and process artefacts from the School's training excavations. 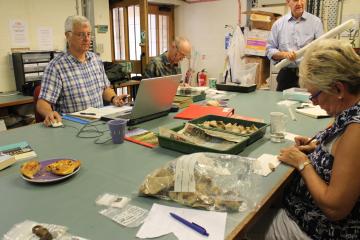 The lower basement space is where the artefacts from the many School of Archaeology field projects are stored, where the archaeo-botanists have a workspace, and where essential finds processing and finds cataloguing takes place. Many projects use this space, including the finds team for the School of Archaeology’s own research and former training excavations at Marcham and Dorchester.  The training dig at the spectacular temple site of Marcham lasted for 11 seasons and produced a vast amount of both Roman and Iron Age finds, including thousands of votive objects such as coins, jewellery, and personal items – all of which are stored in the Institute basement. Excavations within the Roman town of Dorchester, jointly undertaken with Oxford Archaeology, took over as the training dig for undergraduates and other students from 2012 to 2018. This site has also produced some spectacular finds including an impressive assemblage of Roman decorated pottery, large amounts of cattle bone, many Roman coins, and some rare late Roman metalwork that hints of the importance of this Roman town in the declining years of Roman Britain.

It has been my good fortune for many years to work on the finds assemblages from both of these amazing sites, with a loyal and highly experienced 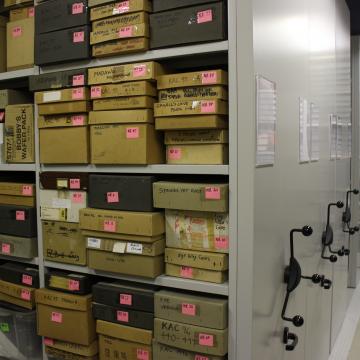 group of volunteers. Many of them are adult students from the Dept. for Continuing Education or interested locals from the Marcham area. Indeed we were doing ‘community outreach’ and ‘educational  impact’ as part of the University’s own training excavations,  years and years before they became the buzz words they are now!  The work undertaken by the volunteers in our work-space is extremely varied. Bulk finds are washed and carefully marked with site codes and context numbers with Indian ink and old fashioned mapping pens (in the manner of a monastic scriptorium!). After some training the volunteers also sort prehistoric and Roman pottery into basic fabric types.  A more specialised task done by volunteers is the cataloguing of Roman iron nails. Roman nails are not viewed enthusiastically by most professional archaeologists it has to be said, particularly as they tend to come up in their thousands on Roman sites like Marcham and Dorchester. So to have a team able to sort them into the various types of building nail, furniture nail, or decorative studs, is invaluable. Other volunteers are completing a project to produce archive photos of all the key small finds from both of these sites, so they will  eventually be available as a research tool on the Archdams database. This summer I took my archaeology volunteers (or they took me, not sure which) on a trip to Hadrian’s Wall. Their knowledge and enthusiasm for the Roman sites we visited was truly impressive and a tribute to all of the archaeological tasks we have undertaken together over the years.