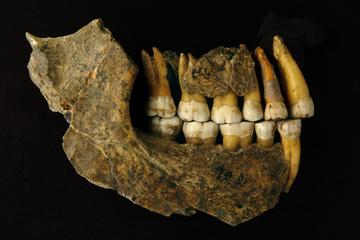 Neanderthal remains from Belgium are thousands of years older than previously reported, according to a new paper  published by PNAS, from a multidisciplinary team of international researchers.

Neanderthal remains from Belgium have long puzzled scientists. Fossil remains from the key site of Spy cave in Belgium suggested a date of approximately 37,000 years ago, which would place them among the latest surviving Neanderthals in Europe. But sample contamination might have affected these estimates.

A team based in Oxford’s Radiocarbon Accelerator Unit has re-dated Neanderthal specimens from Spy cave. Most of the dates obtained in this new study have been found to be much older than those obtained previously on the same bone samples—up to 5,000 years older in certain cases. According to the paper, Re-evaluating the timing of Neanderthal disappearance in Northwest Europe, this suggests Neanderthals disappeared from the region 44,200-40,600 years ago, much earlier than previously estimated.

Tom Higham says, ‘Dating is crucial in archaeology, without a reliable framework of chronology we can’t really be confident in understanding the relationships between Neanderthals and Homo sapiens as we moved into Europe 45,000 years ago and they began to disappear. That’s why these methods are so exciting, because they provide much more accurate and reliable dates. The results suggest again that Homo sapiens and Neanderthals probably overlapped in different parts of Europe and there must have been opportunities for possible cultural and genetic exchange.’

Lead author, Thibaut Devièse says, ‘The new chemistry methods we have applied in the case of Spy and other Belgian sites provide the only means by which we can decontaminate these key Neanderthal bones for dating and check that contaminants have been fully removed. This gives us confidence in the new ages we obtained for these important specimens.’

Grégory Abrams, of the Scladina Cave Archaeological Centre in Belgium says, ‘We also (re)dated Neanderthal specimens from two additional Belgian sites, Fonds-de-Forêt and Engis, and obtained similar ages than those from Spy. Dating all these Belgian specimens was very exciting as they played a major role in the understanding and the definition of Neanderthals. Almost two centuries after the discovery of the Neanderthal child of Engis, we were able to provide a reliable age.’

The team found a Neanderthal scapula from the Spy cave that had produced very recent dates previously (around 28,000 years ago) was heavily contaminated with modern bovine DNA. These results suggest that the bone had been preserved with a glue prepared from cattle bones.

The team used an advanced method for radiocarbon dating fossil bones. Using liquid chromatography separation, they were able to extract a single amino acid from the Neanderthal remains for dating. This so-called ‘compound-specific’ approach allows scientists to reliably date the bones and exclude carbon from contaminants such as those from the glue that was applied to the fossils. These contaminants have plagued previous attempts to reliably date the Belgian Neanderthals because their presence resulted in dates that were much too young.

The results also highlight the need for robust pre-treatment methods when dating Palaeolithic human remains to minimize biases due to contamination, according to the authors. The team is now analysing archaeological evidence, such as bone tools, to further refine our understanding of the cultural transition between Neanderthals and Homo sapiens in this region.