Reconstruction of the oldest shark attack on a human, from Tsukumo shell-mound, Japan

Reconstruction of the oldest shark attack on a human, from Tsukumo shell-mound, Japan

Few creatures inspire as much awe, fear, and fascination as sharks, and this has not changed over the course of time. Three thousand years ago, a man likely fishing with his companions in the Seto Inland Sea of the Japanese archipelago came face-to-face with an end he could not escape. Published today in Journal of Archaeological Science: Reports, an international team, led by researchers from the School, has reconstructed the circumstances surrounding the attack, and his skeleton now documents the earliest direct evidence we have for a shark attack on a human. How did we come to understand this?

After completing her masters here in Archaeological Science, J. Alyssa White travelled to Japan with fellow DPhil student Izumi Braddick and their supervisor Professor Rick Schulting, to investigate the collections at Kyoto University, as a part of their project investigating evidence of violent trauma among the remains of prehistoric hunter-gatherers and early farmers of the Japanese archipelago.

As these things normally go, in the last hour of the last day of their visit Alyssa and Rick opened a box containing the remains of a man covered with traumatic lesions (individual No. 24 from the Tsukumo Shell-mound cemetery site, excavated ca. 1920). Radiocarbon analysis of the individual by co-authors based at Tokai, Tokyo Metropolitan, and Tokyo universities, revealed that he died between 1370 and 1010 cal BC. They were initially flummoxed as to what could have caused at least 790 deep, often serrated injuries to one man, mainly confined to his arms, legs, and front of the chest and abdomen.

Clearly this man had suffered great violence but now Alyssa and Rick needed to determine for what purpose and by whom?

Through a process of elimination they began to narrow down the potential culprits. They were able to rule out human conflict as the serration marks didn’t match weapons available. Some of the lesions were very sharp, deep, and V-shaped, mimicking wounds caused by metal implement that weren’t used by the Jōmon culture hunter-gatherers of this period. Terrestrial carnivores and scavenger tooth marks are not consistent with the lesions found on Tsukumo No. 24, nor was the pattern of injury on the skeleton, which obviously had areas that were preferentially targeted. After considering and dismissing terrestrial carnivores and taphonomic damage, they researched further afield and were left with the dawning realisation that the culprit who left so many distinctive and consistent lesions on the man’s bones was none other than a shark.

Archaeological cases of shark reports are extremely rare, hence Alyssa and Rick turned to modern forensic cases of shark attacks for clues and found that nearly all of the diagnostic characteristics of a shark attack were present on Individual No. 24’s skeleton. The distribution of wounds was also consistent with these attacks. They then consulted with shark attack expert George Burgess, Director Emeritus of the Florida Program for Shark Research, who concurred with their assessment and joined them in their investigation.

Now they had to ask themselves a grisly question: was he alive during the attack or was this an act of scavenging?

Reconstructing the attack and identifying the culprit

Screenshot from the Tsukumo 24 BodyMap 3D

His left hand was missing, along with his right leg. Excavation records for Tsukumo No. 24, including a photograph of the skeleton in situ, confirm that he was missing his right leg at burial and that his left leg was placed on top of his body in an inverted position. The pelvis has tooth marks in the area near where he lost his right leg. The majority of larger bites on the lower body suggest that he was probably in deep water, possibly swimming, and was alive at the time of the attack. The missing, sheared off left hand best is explained as a defensive wound as he tried to fend off an attack from below. The skull and vertebrae are free of injuries most likely because they didn’t offer enough flesh to interest the attacker.

Once Alyssa recorded the locations of all of the tooth marks, it became clear that visually presenting the sheer number of wounds would be challenging. Alyssa and Rick were already working with spatial analyst Dr John Pouncett on how the skeleton might be treated as a map and then visualised and analysed using 3D geographical information system (GIS) methods. Hence, they adapted a 3D model of the skeleton to match Alyssa’s recording strategies. The completeness and trauma of Tsukumo No. 24 were mapped and quickly showed that a number of bites would have severed major arteries, suggesting that he would have lost consciousness within a few minutes and died soon afterwards. You can explore this model of Tsukumo No. 24 for yourself by clicking on this link: Tsukumo 24 BodyMap 3D.

This attack was likely witnessed by others, perhaps his fishing companions, since someone recovered what they could of his body to bury in the village cemetery. They must have reacted quickly to gather his body because smaller bones like those of his remaining hand would have been lost if he had stayed in the water for a long period of time. Perhaps in getting his body back to shore, at some point his left leg, already heavily damaged from the attack, detached from his hip and was carefully placed upon his chest in the final funerary rites of laying him to rest.

The most likely shark species responsible for the attack was determined to be a either tiger or white shark based on the character of the tooth marks (both sharks have serrated teeth) and their feeding habits and distribution according to sea temperatures of the time. CT scans of the tibia and pelvis found no embedded shark teeth. Unfortunately, the bite marks are so numerous that they overlap in most cases, obscuring whole bite marks to the point that it was not possible to isolate one suitably large enough to determine the spacing of the teeth, which would have helped identify which species was the culprit.

While this was a terrible attack resulting in the death of a man, the simple fact that researchers were initially puzzled by the injuries – and that this is now the earliest documented case in the world – highlights the rarity of such events. The vast majority of lethal encounters with sharks end with the death of the shark rather than the human. Even during the period that Tsukumo No. 24 was alive, it is likely that shark hunting occurred on the Japanese archipelago based on caches of shark remains. The International Shark Attack File reports that there are on average less than 10 human fatalities worldwide caused by sharks annually. In comparison, it is estimated that humans kill approximately 100 million sharks annually, a number that is unsustainable and will lead to the extinction of many shark species. The would be a great loss.

The Jōmon culture of the Japanese archipelago is first distinguished by some of the earliest pottery production in the world and lasted for over 10,000 years. The Jōmon people crafted bone and stone tools, including arrowheads, fishhooks, and chipped and polished stone axes. Jōmon individuals engaged in extensive trade of materials such as jade and obsidian, reaching even to the Korean Peninsula. They depended on local food sources that they acquired by hunting, fishing, and gathering, although, towards the end of the Jōmon period, there is evidence that they cultivated some plant species, such as adzuki and soybeans. The Jōmon people didn’t rely on agricultural crops as their main food source, even though agriculture was spreading into the Korean Peninsula from China from at least 3500 BC. Yet, they invented ways of processing and storing their foods, like storing nuts in pits underground, that allowed them to live semi-sedentarily. They used formal cemeteries when burying their dead. Often these cemeteries were located in shell-mounds, created due to the consumption of shellfish, and helped to preserve human remains in the relatively acidic soil of the Japanese archipelago. In Kyūshū around 900 BC the end of the Jōmon period began with the introduction of agriculture that marks the subsequent Yayoi period. 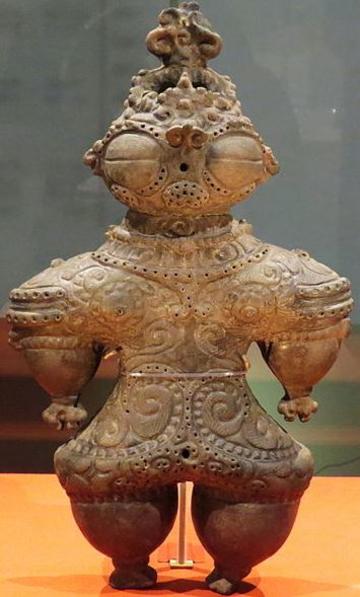 “Dogū”: a Jōmon ritual clay statue found throughout the Jōmon period, but that flourished from the Middile Jōmon onwards.