The Intersection of Heritage with Past-Facing Academic Disciplines: a Panel Discussion. 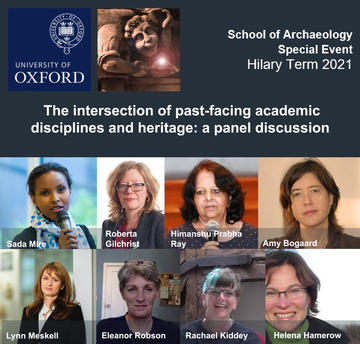 On Friday 12 March, the School of Archaeology hosted this special panel convened in honour of the centenary of women at Oxford and in celebration of International Women's Day 2021. The panel considers the intersection of past-facing academic disciplines with heritage. What is ‘heritage’ as a cross-disciplinary space (within and beyond the heritage sector)? What contributions can academic disciplines with an interest in the past make to heritage, through the pandemic and beyond? And what forms of collaboration are important?

Professor Dame Sarah Whatmore (Head of Division, Social Sciences) opened the event. She is Professor of Environment and Public Policy in the School of Geography, Oxford. Her research focuses on cultures of nature and interrogates the ways in which human relations with the natural world are imagined and practiced in the conduct of science, governance and everyday life.

Professor Roberta Gilchrist is Professor of Archaeology and Dean of Research for Heritage and Creativity at the University of Reading. She is closely involved in applied heritage work through projects at medieval sites, comprising architectural conservation, heritage management and public interpretation. Her ‘passion project’ is currently Glastonbury Abbey, where she has been considering the intersection of archaeology with medieval and contemporary myths, spiritual beliefs and multi-vocality. She has worked closely with a range of ‘heritage’ institutions including the National Trust, British Museum, Museum of London Archaeology and Historic England.

Dr Rachael Kiddey is a British Academy Postdoctoral Fellow at the School of Archaeology, Oxford, working on a project called ‘Migrant Materialities’. Her research combines anthropological and archaeological approaches to the contemporary past, including the engagement of diverse publics in cultural heritage work, and developing cultural heritage approaches to contemporary social issues.

Professor Lynn Meskell is Penn Integrates Knowledge Professor at the University of Pennsylvania. She is Richard D. Green Professor of Anthropology in the School of Arts and Sciences, Professor in the Graduate Program in Historic Preservation, and curator in the Middle East and Asia sections at the Penn Museum. She is currently A.D. White Professor-at-Large at Cornell University (2019–2025). We are delighted that Lynn holds an honorary visiting professorship at Oxford for 3 years, as well as honorary professorships at Liverpool University, Shiv Nadar University, India and the University of the Witwatersrand, South Africa.

Dr Sada Mire is a cultural theorist who has made the case that cultural heritage is a basic human need, including in times of war. She works in Somalia and Somaliland, and is presenter and writer of a Leiden University course entitled, ‘Heritage under Threat’. Sada’s new book is entitled, ‘Divine Fertility: the continuity in transformation of an ideology of sacred kindship in NE Africa’.

Professor Himanshu Prabha Ray is a Research Fellow at the Oxford Centre for Hindu Studies. She is a former chair of the National Monuments Authority of India and was professor at the Centre for Historical Studies, Jawaharlal Nehru University, New Delhi. She edits the Archaeology and Religion in South Asia Routledge Series, including a 2016 volume entitled, ‘Decolonising Heritage in South Asia: the global, the national and the transnational’.

Professor Eleanor Robson s Professor of Ancient Middle Eastern History and Head of the History Department at University College London. She directs the Iraq-centred Nahrein Network, which works with academic and non-academic partners to develop the capacity of Middle Eastern universities, museums, archives and cultural heritage sites to foster cultural and economic growth in the region. The network was recently awarded an £11 million philanthropic gift to fund an expanded range of research, advocacy and capacity building to 2031.