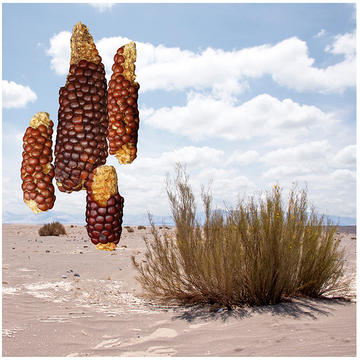 The archaeological record shows that large pre-Inca agricultural systems supported settlements for centuries around the ravines and oases of northern Chile’s hyperarid Atacama Desert. This raises questions about how such productivity was achieved and sustained, and its social implications. Using isotopic data of well-preserved ancient plant remains from Atacama sites, we show a dramatic increase in crop nitrogen isotope values (δ15N) from around ad 1000. Maize was most affected, with δ15N values as high as +30‰, and human bone collagen following a similar trend; moreover, their carbon isotope values (δ13C) indicate a considerable increase in the consumption of maize at the same time. We attribute the shift to extremely high δ15N values—the highest in the world for archaeological plants—to the use of seabird guano to fertilize crops. Guano—‘white gold’ as it came to be called—thus sustained agricultural intensification, supporting a substantial population in an otherwise extreme environment.

Francisca states that "We analysed different types of samples in very well preservation state such as maize cobs, maize grains, popcorn, squash, pumpkin, quinoa, beans, potatoes and wild fruits. As for the fertilised crops, there is certain variability that shows low and high values of nitrogen. This might be suggesting that not everyone had access to seabird guano. We believe only certain groups such as local elites had access to it during the Late Intermediate Period (AD 1000-1450)."

The Conversation: How a pre-Incan civilisation thrived in the Atacama Desert thanks to seabird poo fertiliser

The Science Times: Ancient Civilization Flourished in the Desert Thanks to Bird Droppings