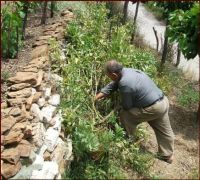 Information on crop nitrogen isotope ratios is crucial not only for placing human dietary reconstruction on a firmer foundation, but also for identifying the intensity of early farming practice. The conventional view is that agriculture evolved from low-input 'extensive' systems (e.g. shifting cultivation, with cropping of newly cleared plots for a few years, followed by a shift to new plots) through progressively more labour-intensive forms of farming (e.g. continuous cropping). There is growing archaeological evidence, however, to suggest that early farming did not resemble shifting cultivation but rather featured 'fixed' fields that were intensively cropped from one generation to the next. The evidence generally used to infer the methods of crop management is indirect, being based on the observation that different combinations of arable weeds are associated with different practices. A method for inferring cultivation intensity directly from the remains of the crops themselves would greatly expand the range of archaeological sites where farming intensity can be assessed, since only a minority of archaeobotanical assemblages contain sufficient quantities of arable weed seeds to address cultivation practices.

The first aim of this project, therefore, is to establish how manuring affects nitrogen isotope ratios in present-day crops. By understanding this effect in the range of cereal and pulse crops that emerged in the Neolithic period, we can improve the reliability of dietary assessment in archaeology and develop a new tool for directly identifying intensive crop management through the practice of manuring. 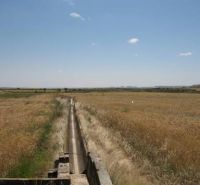 The second aim of the project relates to major debates in archaeology concerning human dietary change in the Neolithic period and change in the intensity of farming during the Bronze Age. We will address the question of whether Neolithic farming diets were primarily crop- or livestock-based by integrating nitrogen isotope ratios for crop remains, animal bones and human bones from archaeological sites of the Neolithic period extending from south-west Asia to northern Europe. For the subsequent Bronze Age period we will similarly analyse crop, animal and human remains from archaeological sites from Syria to northern Europe to determine the extent and direction of changes in farming that were associated with the rise of early complex societies.