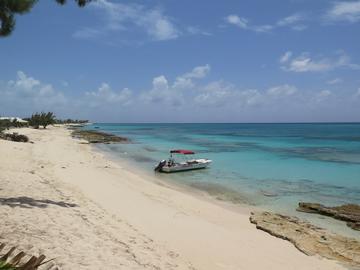 In a new study published this week by an international team including Rick Schulting, John Pouncett, Christopher Ramsey, Tom Higham and Joanna Ostapkowicz, AMS 14C dating and stable isotopic analysis of pre-Columbian human remains from the Bahamian archipelago reveal dietary trends which enabled them to adapt to the challenging environment of the islands.

The limestone islands of the Bahamian archipelago provide a challenging environment for human settlement, one that was not taken up until after AD 700. The analysis of human skeletal remains offers new insights into how this challenge was met. A substantial program of AMS 14C dating on pre-Columbian humans (n = 66) provides a robust chronological framework for the period ca. AD 1000–1600, with the latter date suggesting the possible persistence of an indigenous Lucayan presence on the islands for some decades later than previously thought. Associated stable carbon (δ13C) and nitrogen (δ15N) isotope analyses imply an early focus on near-shore marine resources that seems to have rapidly led to their local over-exploitation, resulting in a shift towards horticulture based mainly on root crops. The Medieval Warm Period is very likely to have been a factor in the initial settlement of the islands; the impact of the Little Ice Age is less clear, with no marked changes in either δ13C or δ15N. Strontium isotope results are consistent with an origin of most individuals within the archipelago, with a limited (but potentially important for maintaining connections) presence of incomers from the Greater Antilles, and perhaps even further afield. Despite the relatively short history of pre-Columbian occupation, Lucayan adaptations to the Bahamian archipelago were dynamic and demonstrate resilience in the face of both human resource depletion and climate change.